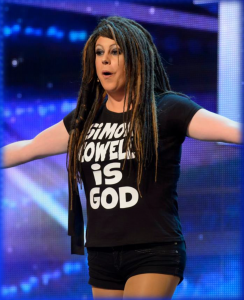 Joanna Ryde first came to prominence in 2006 when her all-singing, all-dancing cabaret act grabbed attention around Ireland. She began appearing in venues and at pride festivals throughout the country and within a year she won Alternative Miss Ireland, the most prestigious title on the Irish cabaret scene.

That year she made her TV debut with appearances on The Podge & Rodge Show and in 2008 she was approached to appear on The All Ireland Talent Show where she narrowly missed out on the live shows. The following year she made a cameo appearance on the sitcom Val Falvey TD and returned to The All Ireland Talent Show where she became a live finalist for Shane Lynch’s Dublin team. She was the first drag performer to reach the final stages of any TV talent show in Ireland.

Joanna gained a loyal following by performing live in venues and events around Ireland and in 2009, moved to Waterford to take up a full time residency with the Dignity Group in their venues in Kilkenny, Waterford and Galway. She also maintained a regular residency in Limerick at Riddlers and in Cork, first in Instinct and then in Chambers.

In 2011 she became a columnist with The Munster Express and released her first novel, Diary Of A Ryde.

She has produced over 20 parody songs on her popular YouTube channel, racking up thousands of subscribers and over a million views, gaining her fans across the world.

Joanna became the first drag act on mainstream radio in Ireland in 2012 with a move to Beat 102 103 where her Ryde Report slot on Beat Breakfast was wildly popular.

In 2013, Joanna stepped back from all stage and radio work when she was approached to appear on Britain’s Got Talent where she received 4 yeses from the judges. She narrowly missed out on the live shows.

Following a number of years out of the spotlight, Joanna has recently returned as the new host of Pride Beats on Noughty Beats.

I use cookies on this website to give you the most relevant experience by remembering your preferences and repeat visits. By clicking “Accept”, you consent to the use of ALL the cookies. I don't really know what this means but me brother's a bit of nerd and made me write it.
Do not sell my personal information.
Cookie settingsACCEPT
Privacy & Cookies Policy

This website uses cookies to improve your experience while you navigate through the website. Out of these, the cookies that are categorized as necessary are stored on your browser as they are essential for the working of basic functionalities of the website. We also use third-party cookies that help us analyze and understand how you use this website. These cookies will be stored in your browser only with your consent. You also have the option to opt-out of these cookies. But opting out of some of these cookies may affect your browsing experience.
Necessary Always Enabled
Necessary cookies are absolutely essential for the website to function properly. This category only includes cookies that ensures basic functionalities and security features of the website. These cookies do not store any personal information.
Non-necessary
Any cookies that may not be particularly necessary for the website to function and is used specifically to collect user personal data via analytics, ads, other embedded contents are termed as non-necessary cookies. It is mandatory to procure user consent prior to running these cookies on your website.
SAVE & ACCEPT