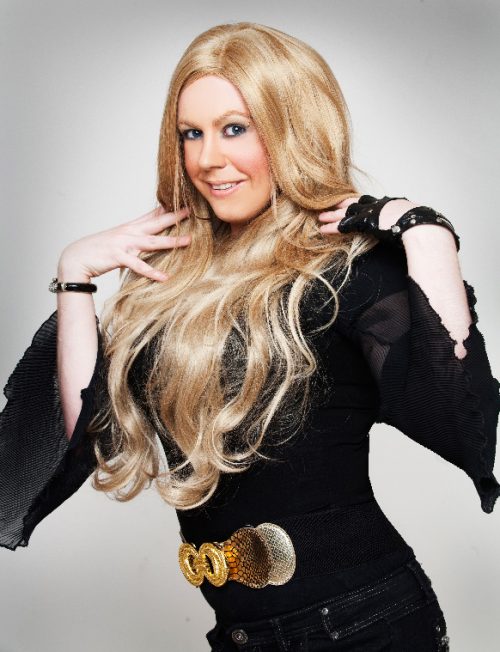 I’ve been making people laugh for 15 years which I know is hard to believe because I’m still so young looking.

I’ve had lots of great adventures over the years including winning Alternative Miss Ireland, getting to the live shows on The All Ireland Talent Show, reaching the final 120 of Britain’s Got Talent, appearing on TV shows such as Podge & Rodge, Val Falvey TD and Ireland’s Craziest TV Moments, publishing a book, hitting over a million views on YouTube, having a newspaper column and mainstream radio slot as well as performing in venues all across Ireland!

It’s been one hell of a rollercoaster, but who doesn’t like a ride!

Check out my radio show every Friday on Noughty Beats!

It’s 2 hours of non-stop noughties pop hits guaranteed to get you in the mood for the weekend! With some of the cheesiest tunes on the radio, you’ll be in the mood for dancing in no time.

If you miss the show, don’t worry. All the songs are added to the Pride Beats Spotify playlist every week!

I use cookies on this website to give you the most relevant experience by remembering your preferences and repeat visits. By clicking “Accept”, you consent to the use of ALL the cookies. I don't really know what this means but me brother's a bit of nerd and made me write it.
Do not sell my personal information.
Cookie settingsACCEPT
Privacy & Cookies Policy

This website uses cookies to improve your experience while you navigate through the website. Out of these, the cookies that are categorized as necessary are stored on your browser as they are essential for the working of basic functionalities of the website. We also use third-party cookies that help us analyze and understand how you use this website. These cookies will be stored in your browser only with your consent. You also have the option to opt-out of these cookies. But opting out of some of these cookies may affect your browsing experience.
Necessary Always Enabled
Necessary cookies are absolutely essential for the website to function properly. This category only includes cookies that ensures basic functionalities and security features of the website. These cookies do not store any personal information.
Non-necessary
Any cookies that may not be particularly necessary for the website to function and is used specifically to collect user personal data via analytics, ads, other embedded contents are termed as non-necessary cookies. It is mandatory to procure user consent prior to running these cookies on your website.
SAVE & ACCEPT